I took fewer notes this time at XOXO - spending my time feeding transcripts to twitter did not feel in the spirit of a festival where so many speakers and attendees had had their livelihoods and voice threatened by harassment on twitter - I spent more time listening and thinking than typing.

As in previous years, I came away from XOXO having celebrated people who make wonderful things online and off, and bring communities together through their creativity; creating and cherishing the publics that form around their works. I met many old friends and colleagues, and talked about the state of the web and how we can rescue it from the silos that grind it into slurry for their streams.

Hapgood talks about the web as garden and stream:

In the stream metaphor you don’t experience the Stream by walking around it and looking at it, or following it to its end. You jump in and let it flow past. You feel the force of it hit you as things float by.

XOXO felt like a return to the garden, a respite from the stream. I need to reflect on this more, and bring back the idea of Tummeling as a practice of the web as prta of my indieweb work.

my pronouns are he/him my name is Jonny, and I've never felt more like an imposter in my entire life - shout out to imposter syndrome! - repeat after me "I am not an imposter, I deserve to be here"

to make community is to seek community.I turned to the internet to look for the feeling of being in a writer's room, and I found weird twitter

the relationships we form online are real, and XOXO shows that. The internet is place for working out who you are

people follow me expecting humour, but I can retweet things about social justice written by people who are smarter about it than me, and be the trojan horse

I pitched "everyone's an aliebn when ur an aliebn too" as a little funny book of comics, but I wanted to adapt the narrative structure of a the twitter timeline to a book

the alien comes to earth and meets a lot of characters, and then you see updates from them as you move through the book

take the things that you are experiencing online, and translate them into different mediums

Emoji is OK at nouns, emotions and active verbs, but it has no notion of I or You

in 2015 there were only 4 roles women could play on the emoji keyboard - Princess, Bride, Dancer or Playboy Bunny

children now talk with emoji before they use words - it is a pidgin now, but they will make it a creole

Are next speakers ate he creators of the Reductress -the first and only satirical women’s magazine, brilliantly skewering condescending and outdated popular tropes in women’s media with cutting humor

the more we satirized experiences, the more we realized what wasn't being talked about - we could identify social issues that weren't being named

in the sketch comedy world we found we were one of the only women in the room, so these shared experiences wouldn't land, online they could

see if you can find things that aren't being said, and find ways to articulate them in your community

This next talk comes with a content warning for racism, nazis and depictions of graphic violence - Matt Furie created Pepe the frog, and had to fight back when it was taken over by white supremacists

Pepe was one of four characters in a comic called Boy's Club - he likes to smoke weed, chill and fart with his buddies

I was used to Pepe being reused as an internet meme, but the political dimension took me by surprise

When Pepe got put on a list of hate symbols of the alt right, I got my friends to make peaceful Pepe memes

I realize that you need to be the change you want to be in the world and follow your bliss, but free legal counsel is pretty sweet

I'm a YouTuber - I don't like the word because it is associated with people who film dead bodies, but that is what I do and how I make my living

I had just dropped out of a Philosophy PhD program, because the examined life was not worth living 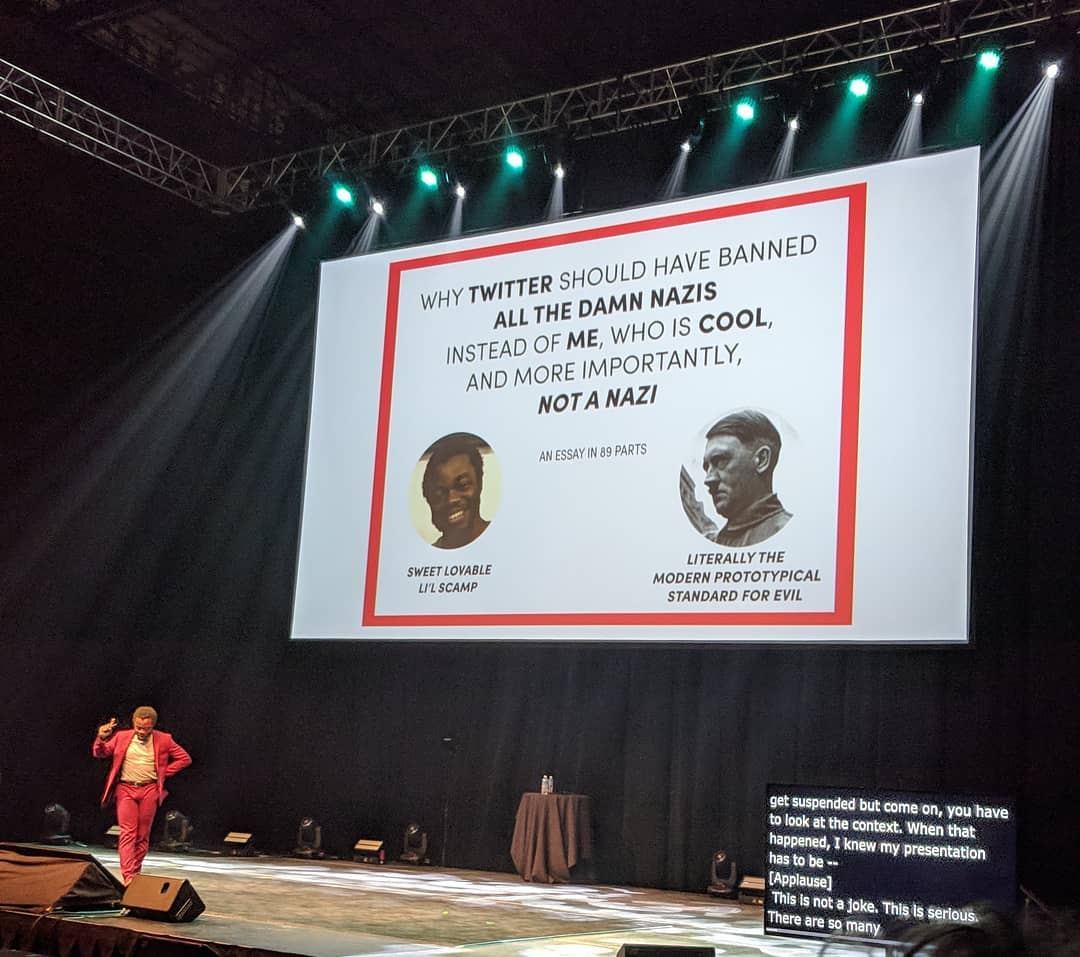 Twitter has been the biggest tool to get me a sustainable career, and a community to help me figure out what is funny

Twitter is an incubator for everything good and bad— it magnifies marginalized voices, and magnifies all your fuck ups too

Comedy can't exist without the space between the laughs. When everything is funny, nothing is comedy.

I get upset with people insist on only communicating with me by referencing my jokes, because subconsciously I know that is what I have been doing.

I grew up on the computer, and when the web came along, it was my country

back in the 1980s there were only about 10% women on line, and many of us hid behind male handles so we wouldn't be harassed

on echo, every conversation had both a mana and a woman as hosts

echo still exists now - Stacy never sold, franchised or IPO'd - the only to get an account is to send in the mail for a brochure

what if the architects of our present day social environments had made the same efforts about inclusion that Stacy made early on?

The Domesday Discs contained virtual reality walks around places, photos and narrative about the UK in 1986

On the web, links are contextual - they're embedded in documents - when one goes down they are broken. microcosm kept all the links separate in a database - they were an overlay on documents

in the late 1980s there were lots of hypertext systems, and nearly every one had women in leading positions

women earned 40% of computer science degrees up until 1984

if there is a boys club that dominates silicon valley today, it is an exception in time.